First edition of The President’s Daughter by Nan Britton, the story of the author’s six-year affair with President Warren G. Harding.

The President’s Daughter marked the first time that a presidential mistress published her story for the public. Nan Britton alleged in the book that President Warren G. Harding was the father of her daughter, Elizabeth Ann Blaesing. With Harding’s untimely death in 1923, he was unable to personally confirm or deny the scandal, but his family denied the allegation for years. In 2015, Britton’s claim was confirmed using DNA testing. Nan Britton died in 1991 and her daughter, Elizabeth, died in 2005. While popular during his presidency, the administration of Warren G. Harding was plagued with scandal. This affair (amongst others) only further tarnished the reputation of the 29th President of the United States. 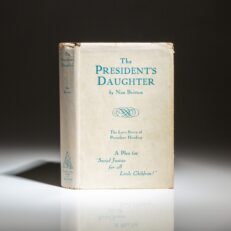 You're viewing: The President’s Daughter $650.00
Add to cart