The Problems Of Lasting Peace

Signed first edition of The Problems of Lasting Peace by former President Herbert Hoover and Hugh Gibson, in scarce near fine dust jacket.

Octavo, viii, 295pp. Blue cloth, title in gilt on spine. Stated “first edition” on copyright page. In publisher’s first edition dust jacket, $2.00 on front flap, a near fine example, with only minimal wear along the spine. (Tracey, 8) Includes laid-in comment leaflet from the publisher, which we have never seen before. Signed by former President Hoover on the front free endpaper: “To E.E. Lincoln, With the Kind Regards of Herbert Hoover + Hugh Gibson.”

Edmond E. Lincoln (1888-1958), a Rhodes scholar from Ohio, was a respected economist. He taught at Harvard University, where he developed a reputation as a writer in the field of business economics. His writing was often critical of the federal spending of the Roosevelt years, which likely drew the attention of President Hoover. In the private sector he worked as an economist for DuPont Company. 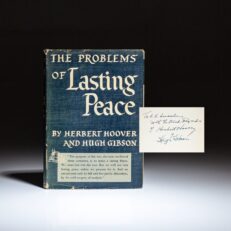 You're viewing: The Problems Of Lasting Peace $625.00
Add to cart