Octavo, xi, [1], 298pp. Olive cloth, title in gilt on spine, gilt medallion on front cover. Top edge gilt, uncut edges. Some fraying of the cloth on spine, light soiling to both covers. Frontispiece portrait of Colonel Roosevelt with tissue cover. Complete with 42 full-page illustrations, a mix of photography and other illustrations. A full account of Roosevelt’s military exploits in Cuba, written as he assumed the governorship of New York. (Wheelock, 11) (Cole & Vail, A18a) A bright copy.

The first edition of The Rough Riders was issued in May of 1899. It was issued with a dust jacket, but none are known to exist.  Second and third issues were published in 1899, both identical to the first state. Theodore Roosevelt served as the 26th President of the United States. He was a prolific author, writing more than 18 books during his lifetime, beginning with The Naval War of 1812 in 1882. His other notable works include The Winning of the West, African Game Trails, and The Rough Riders. 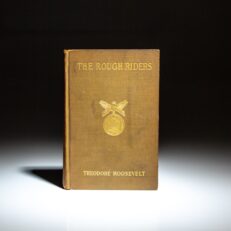