Comments: Senator Robert A. Taft was the eldest son of President William Howard Taft. He was elected to the Senate in 1938 and would go on to pursue the Republican nomination for President of the United States three times. He passed away from cancer in 1953. This book was written to honor his legacy. The following year, he would be featured in President Kennedy’s book, Profiles in Courage. The Taft Story won the Pulitzer Prize for Biography in 1955. 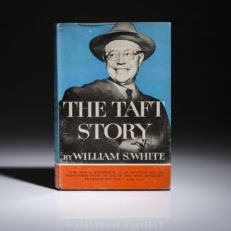