Octavo, 342pp. Red cloth, title stamped in gilt on spine, Theodore Roosevelt’s signature blind stamped on front cover, frontispiece portrait of Roosevelt, clean text with minor toning to endpapers. Publisher’s illustrated dust jacket in rich colors of red and gold, retail price of $6.00 on front flap, light soiling to cover with scuff mark along spine, small dampstain on the interior bottom edge of spine, small tears along top/bottom edges with some chipping to top edge of spine. Inscribed by the author on front free endpaper: “For C.D. Jackson / with the consciousness that TR / would approve the kind of Americanism / that he presents in the pages of Life – / with best wishes, / Hermann Hagedorn / 1958.”

Charles Douglas “C.D.” Jackson (1902-1964) was an executive with Time, Inc. He began working for the company in 1931, and over the years, he held various positions, including publisher of Fortune and Life magazines. Periodically, Jackson took leaves of absence from his executive duties to take on military, diplomatic and political assignments. During World War II, being an expert in psychological warfare, Jackson was Deputy Chief of the Psychological Warfare Division, SHAEF (Supreme Headquarters Allied Expeditionary Force), and in the early 1950s, he served as Special Assistant to President Dwight D. Eisenhower, advising the White House on international affairs, cold war planning and psychological warfare. 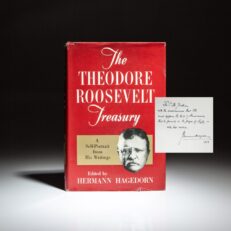 You're viewing: The Theodore Roosevelt Treasury $325.00
Add to cart