The Truth Of The Matter

× Ask a Question re: The Truth Of The Matter
SKU: 11180 Categories: Jimmy Carter, United States Politics

Signed by President Jimmy Carter and the author, Bert Lance, first edition of The Truth of the Matter: My Life In and Out of Politics.

Octavo, 256pp. Blue hardcover, spine in blue cloth, title stamped on spine. A first printing, with full number line on copyright page. In the publisher’s fine dust jacket, retail price on front flap. This copy is signed on the half-title by President Jimmy Carter and his Director of the Office of Management and Budget, Bert Lance.

Bert Lance (1931-2013) served as President Carter’s Director of the Office of Management and Budget but was forced to resign in the first year of his presidency. Lance met President Carter in 1966 and served as Georgia State Highway Director while Carter was Governor of Georgia. During the presidential campaign against Gerald R. Ford, Lance was a close adviser to Carter. A year into the Carter Administration, Lance was forced to resign due to charges of corruption in his previous position as Chairman of Calhoun First National Bank of Georgia. Lance was later acquitted of all charges and remained close to the Carters, until his death in 2013. 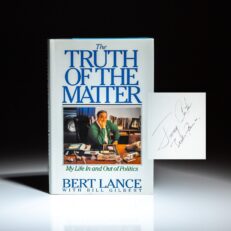