Signed limited edition of The Unvanquished by William Faulkner, in the original acetate jacket.

William Faulkner (1897-1962) was a two-time Pulitzer Prize-winning author, recognized for A Fable in 1955 and The Reivers in 1963. The Sound and the Fury, As I Lay Dying, and Light in August were recognized by The Modern Library on their 1998 list of 100 Best English-language Novels of the 20th Century. Faulkner primarily set his stories in the American South, many of which took place in the fictional Yoknapatawpha County. The Unvanquished contains seven short stories originally published individually in The Saturday Evening Post and Scribner’s, with the exception of “An Odor of Verbena” which was saved for the release of this work. Chronologically, The Unvanquished takes place before the events of the novel Sartoris, despite the latter’s original release year of 1929. Both novels are set in Yoknapatawpha County. 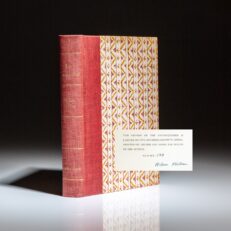