Octavo, xviii, 222pp. Brown cloth, title and illustrations in gilt, black and white on spine and front cover, all bright. Top edge gilt. Complete with 80 photogravures of Indian chiefs and Indian life. Solid text block, free of marks or notations. Touch of rubbing to cloth on rear cover and hinge, else fine. A near fine example.

The Vanishing Race chronicles the Wanamaker Expeditions, which were led by Dr. Joseph K. Dixon. These expeditions took place from 1908 to 1913 with the purpose of documenting the lives and cultures of Native Americans living in the western United States during the 20th century. The expeditions were funded by Rodman Wanamaker (1863-1928), son of John Wanamaker, the Philadelphia department store magnate. 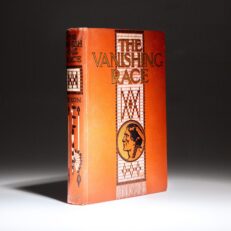