The Vladivostok Negotiations and Other Events

Signed speech from former President Gerald R. Ford titled The Vladivostok Negotiations, delivered to the Faculty Seminar on International Security at University of California, San Diego, in February of 1986.

The Vladivostok Summit Meeting on Arms Control took place in 1974 between sitting President Gerald R. Ford and Soviet Premier Leonid Brezhnev, with the intention of extending arms control provisions between the United States and USSR. Both agreed to limit certain types of weapons, with some calling the summit the peak of detente between the nations. In this speech before the University of California, San Diego in 1986, Ford was cautiously critical of the Reagan administration’s approach to arms control with the USSR, thinking that some of the gains in 1974 had been lost. 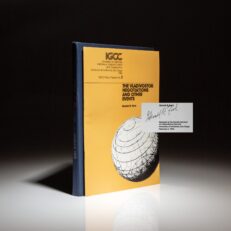 You're viewing: The Vladivostok Negotiations and Other Events $275.00
Add to cart