Signed first edition of The Wall by John Hersey.

John Hersey’s novel The Wall was released after his famous piece “Hiroshima” was published in The New Yorker. Like “Hiroshima,” The Wall gave readers a true retelling of one of the horrors of World War II, but this time the setting was the Warsaw Ghetto, one of the largest Jewish ghettos during the Holocaust. The book received the National Jewish Book Award in 1950. Roger Butterfield, the recipient of this copy, was a historian focusing on American history and a journalist who reported for Time and Life magazines. 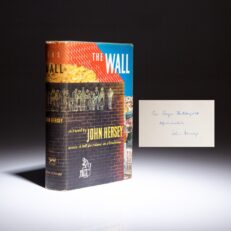