Inscription reads: “Dear Jane – At last our guidebook is a reality! – and I can never thank you enough for all you did to make it possible. – Jackie.”

The recipient of this book, Jane Engelhard (1917-2004) was a wealthy philanthropist and benefactor of the White House restoration undertaken by First Lady Jackie Kennedy. Mrs. Engelhard was the wife of industrialist Charles Engelhard, Jr. The Engelhards were active in Democratic politics, but due to their philanthropy, they maintained close relations with future presidents of both political parties. 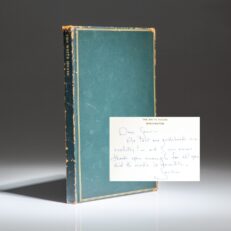