Comments: Theodore Roosevelt served as the 26th President of the United States. He was a prolific author, writing more than 18 books during his lifetime, beginning with “The Naval War of 1812” in 1882. His other notable works include The Winning of the West, African Game Trails, and The Rough Riders. This is a complete collection of all his writings, in 24 separate volumes, produced after his death in 1919. 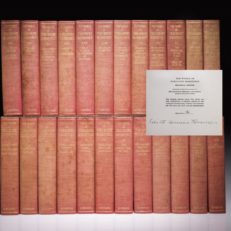