Tour Of The President Of The U.S.A. Via The North Western Line October 1911

× Ask a Question re: Tour Of The President Of The U.S.A. Via The North Western Line October 1911
SKU: 12345 Categories: New Inventory, Ohio History, William Howard Taft

Signed by President William H. Taft, Tour of the President of the U.S.A via the North Western Line, October 1911.

Octavo, [8pp]. Printed paper dust cover, bound at spine with string. Map of the route on rear panel. Frontispiece portrait with tissue cover. Includes the President’s full itinerary through the Upper Midwest, with thirty individual stops on his schedule. This work is signed by President Taft below his portrait, on a line left blank by the publisher for “those fortunate enough to meet President Taft.” No other known signed copies exist. Housed in custom blue cloth folder, title in gilt over red morocco label on front cover. An attractive and scarce presidential piece.

The seven days that President Taft spent touring the Upper Midwest was only a small part of his larger national tour, taking him out of Washington from September until November 1911. Upon the completion of his trip, he had traveled 15,000 miles by railway, 1,000 miles by automobile, given 350 speeches and was seen by 5 million American citizens. It was the longest trip by any President of the United States to date. (The New York Times, November 1911) 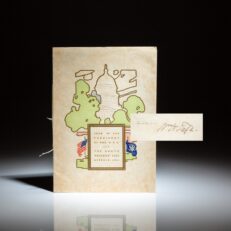