The Vietnam War (1954-1975) is considered the first “living room war” due to its daily appearance on television and in the press. The war’s controversial and polarizing nature only further propelled its publicity and detailed documentation, as seen in this example. The majority of these photos are from late 1967 and early 1968, on location in Hue, Nui Dat (an Australian base now a part of Ba Ria), Saigon, and Long Binh/Bien Hoa (outside Ho Chi Minh). Multiple images refer to Operation Coburg, an Australian and New Zealand military action against the North Vietnamese and the Viet Cong over the Lunar New Year festivities of 1968. It was the first time the Australian Task Force was deployed beyond its Tactical Area of Responsibility, which set a precedent for later operations that extended beyond the assigned province of Phuoc Tuy. 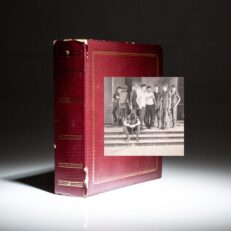