War In A Time Of Peace – Bush, Clinton, And The Generals

Comments: Mrs. Lauren Bacall was an Academy Award Nominated Actress, staring alongside notable actors such as Humphrey Bogart, Marilyn Monroe and Betty Grable. She was also known as a democratic political supporter, with close ties to the Kennedy family and President Harry Truman. She passed away in 2014 in New York City. Provenance: from The Lauren Bacall Collection at Bonhams, May 2015. 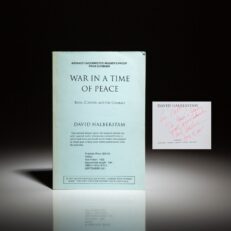