Personal letter from First Lady Nancy Reagan to a classmate from Smith College in 1981. In this three page letter she addresses a number of early controversies of the Reagan Administration, include the White House china, her clothing style, accusations of lavish spending, comparisons to Jackie Kennedy and her desire to have a facelift. Written in black ink on blue White House stationary, 4 pages, previously folded. Includes original mailing envelope, with address in Nancy Reagan’s hand. Housed in custom blue cloth folio, letters in archival sleeves. Title on front cover on printed label. An exceptionally personal account of White House life by Nancy Reagan.

Comments: Full Text of the letter: Dear Kim, Thanks so much for your nice letter- even if it was prompted by a not-so-nice letter! I’ve never been able to understand the furor over the china especially since it was donated- no expense to anyone- I didn’t buy it-just accepted the donation. But it was badly needed- there had been none bought ( a complete service that is) since Truman’s day. Interestingly enough- Margaret Truman issued a statement defending me saying she knew how much it was needed. Then I found out that Eleanor Roosevelt had been terribly criticized for the same thing- only difference being that time, the people paid for it – this time they didn’t. Oh well- maybe someday it will all fall properly into place. Yes, I did see “Jackie O” on T.V. and it certainly struck a chord. I wouldn’t spend the money on clothes they said I did even if I’d had it! I’m sure it was fun going back for reunion – I think! You’re nice about how I look- I wish I could have a face lift! Thanks again- Best Nancy. 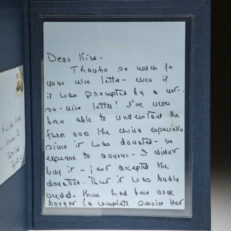