With the assassination of Egyptian President Anwar Sadat, there was concern that sending a sitting United States President would be too dangerous. Protocol demanded that a high level delegation from the United States was needed for the trip, but sending less senior officials would be viewed as a lack of engagement by the United States. Secretary of State Alexander Haig suggested that the 3 former living Presidents attend, which all three accepted. With Richard Nixon in political exile since Watergate, President Carter having just lost an election and President Ford getting pressure from his family to avoid dangerous situations, all three had their reasons not to attend. This trip also marked a thawing in relations between the living former presidents, with President Carter and President Ford striking up a lifelong friendship afterwards. This photograph marked the first time that 4 sitting Presidents had joined together at the White House. Photograph signed by President Ronald Reagan, along with former presidents Jimmy Carter, Gerald R. Ford and Richard Nixon. Framed in contemporary black frame, gold edge, museum archival glass. A fine signed copy. 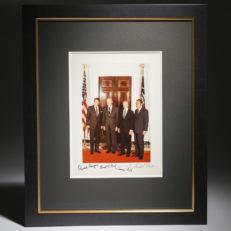