Two prints from The White House Historical Association, being the official White House portraits of President Jimmy Carter and First Lady Rosalynn Carter. Both prints are signed by the subject.

Measure 17″ x 14″. Both printed on thick cardstock, white border. Both copies were issued by The White House Historical Association. The portrait of Rosalynn Carter was painted by George Augusta, and the portrait of President Carter by Herbert E. Abrams. One is signed by First Lady Rosalynn Carter, and the other is inscribed “Best Wishes, Jimmy Carter.” 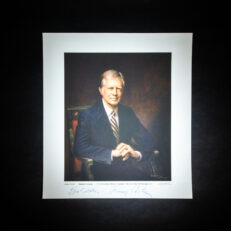