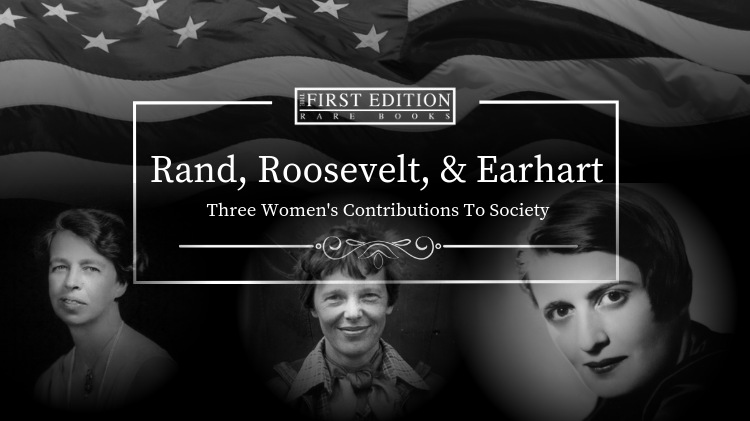 There is nothing quite like a good biography. With absolutely no fictional information, the writer will take a reader on an adventure to an entirely another world. The best part? This isn’t a creation from someone’s mind, but rather a picture of another living, breathing human being doing the best they could in a world in which they lived. Here, we take a closer look at some of the most famous women examined in biographies who have made invaluable contributions to history and society: Ayn Rand, Eleanor Roosevelt, and Amelia Earhart.

Ayn Rand is best known for her two best-selling books, Atlas Shrugged and The Fountainhead. She was born in Russia in 1905 as Alissa Rosenbaum and then moved to the US in 1926, first to Chicago, and then to try her hand in Hollywood. Rand was a staunch proponent of individual self-interest over collectivist values due to her experience with her father’s shop being overtaken by Bolshevik soldiers, forcing her family to live in poverty in Crimea. This philosophy was echoed in her first novel, We the Living, and became even more prominent in her later works. In addition to literature, Rand also worked in film, with titles like Red Pawn and Penthouse Legend (later renamed Night of January 16th) under her belt.

Over the years, she coined the term “objectivism”, a belief in a solid reality in which there are existing truths, as well as the moral importance of looking out for self-interest. The development of objectivism essentially ended her literary career, at which point she became a bona fide intellectual, forming a group that called itself “The Collective” and included members such as Alan Greenspan, the one-time Federal Reserve Chairman. She continued to teach and pursue speaking engagements until she died of heart failure in New York City in 1982.

Meanwhile, Eleanor Roosevelt is probably one of the most influential First Ladies in American History. She was born in 1884 in New York City, and was not only married to US President Franklin D. Roosevelt but also was the niece of President Theodore Roosevelt. Eleanor truly redefined the role of First Lady by taking up and pursuing issues she was passionate about. She was not a woman content to be at home pursuing a domestic life. This go-getter attitude can probably first be traced back to World War I when she worked for the Red Cross. Years later, during her time as First Lady, she was a fierce advocate for human rights, children’s rights, and women’s rights.

She balanced this work while acting as a caregiver to her husband who suffered from a polio attack and needed assistance for the rest of his life. Reading and rhetoric were two of her strengths, having penned her own column and holding many a press conference in her day. Eleanor even went on to write several books, including This is My Story, This I Remember, On My Own, and It’s Up To The Women. After her time in the White House, she proceeded to become the chair of the UN’s Human Rights Commission, continuing her legacy for public service until her death in 1962.

Finally, there is the autobiography of Amelia Earhart, who was the first female pilot to fly across the Atlantic Ocean. Affectionately coined “Lady Lindy,” she broke the barrier for women in her field. Earhart was only the 16th woman to be issued a pilot’s license and also served as the first person to fly over both the Atlantic and Pacific oceans. She is, unfortunately, also well known for her mysterious disappearance alongside navigator Fred Noonan. While attempting to fly around the world, the pair disappeared near Howland Island out in the Pacific Ocean. She was legally declared dead by the Los Angeles Superior Courts in 1939.

Whether a Russian immigrant credited with producing some of the most well-known novels of the 20th century, an impassioned First Lady for the ages, or an airplane pilot going where no woman had gone before, biographies transport us to a world beyond our own and serve as an inspiration and a record to last the test of time.