Brigadier General Horace F. Wulf (1896-1987) was a former managing editor of the Daily Calumet newspaper and a veteran of both World Wars. During WWII he was awarded the Bronze Star and Silver Star for heroic action in North Africa, where he led the 133rd Infantry Regiment. In Tunisia, with Germans trying to get behind the Allied lines, Wulf’s battalion stopped a German panzer division at Kef-el-ararh Pass, an action which became known as “Wulf’s Mission.” The following month he led an assault on Hill 609 in Tunisia, taking command of a battalion after the commander was wounded. He left the army as a Lieutenant Colonel in 1947, but was promoted to brigadier general by the Iowa National Guard as a reservist. 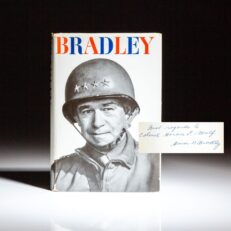