Octavo, viii, 81pp. Light gray cloth, title printed in blue on spine and front cover. First edition with Scribner’s “A” on copyright page. Faint toning to spine, some foxing to frontispiece. In the publisher’s near fine dust jacket with $1.25 retail price on front flap, light wear at top edge of spine, bright illustrations and vibrant blue coloring. (Tracey, 7) Signed by President Herbert Hoover on the front free endpaper: “To Mr. and Mrs. Igor I. Sikorsky, With the Kind Regards of Herbert Hoover.” A superb association copy. Provenance: From the estate of Susana and Nickolai Sikorsky, the son and daughter-in-law of Igor Sikorsky. Estate sale in West Hartford, CT, May 2021. 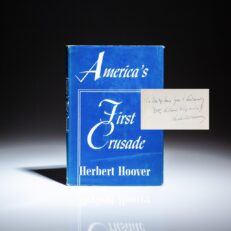