The Sinai Interim Agreement, also known as the Sinai II Agreement, was a diplomatic agreement signed between Egypt and Israel on September 4th, 1975 in Geneva. This photograph of Anwar Sadat, relaxing in Alexandria, Egypt, was taken following negotiations between the two countries, which resulted in parts of the Sinai Peninsula being returned to the control of Egypt. 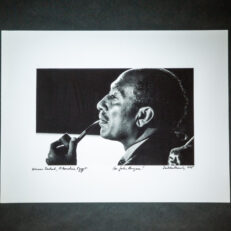