Army Of The Potomac

Signed limited edition of Army Of The Potomac by George B. McClellan, inscribed to the Chief of Staff of the Prussian Army, Helmuth von Moltke.

For McClellan, the high point of his journey to Russia in 1869 was his interview with Helmuth von Moltke, the celebrated chief of staff of the Prussian army. Moltke confided details of the recent Austro-Prussian War and flattered him (McClellan) with the observation that his Peninsular Campaign of 1862 would surely have ended the Civil War had he not been ‘shamefully deserted’ by the Lincoln government.” (George B. McClellan: The Young Napoleon, 1988). Count von Moltke, also referred to as Moltke the Elder, was credited with creating modern European warfare. He led the Prussian armies during the Franco-Prussian War, which led to the creation of the German Empire in 1871. 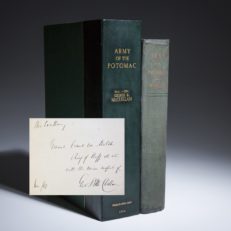