First edition of Autobiography of George Dewey, with a personal letter from Admiral Dewey regarding the book.

Octavo, xii, 337pp. Green cloth, title in gilt on spine and front cover, four white stars on a blue field on front cover. No additional printings listed on copyright page. Complete with 32 plates, including frontispiece with tissue, and a full-page map. Solid text block, top edge gilt, a touch of wear to edges, lightly bumped corners, a near fine example. Includes a laid-in letter signed by Admiral Dewey, held in original envelope with 2-cent stamp and postmark dated “Nov 17 1913.” In publisher’s dust jacket, $2.50 retail price on spine, light soiling to front and rear covers, a touch of chipping to spine.

George Dewey (1837-1917), Commander of the Asiatic Squadron from 1897-1899, defeated the Spanish at the Battle of Manila Bay on May 1, 1898. Following his victory, Dewey was promoted to Rear Admiral by President McKinley, and in 1899, he received a special title from Congress naming him Admiral of the Navy, the only person in United States history to attain this rank. In the letter accompanying this book, Admiral Dewey notes: “My principal reason for writing it was to tell the true story of the Manila Bay campaign, and not so much a life history. While writing most of my thoughts were concentrated on this point. On account of not considering events of my earlier life so important, perhaps that part of the book in which these are embraced is not as full as it should be. You speak of my not mentioning Admiral Evans. The truth is there are hundreds of others I did not mention. I did not know Admiral Evans at the time you state, as he was a young officer, and it never occurred to me to mention him. I suppose for the same reasons he did not mention me in his book.” 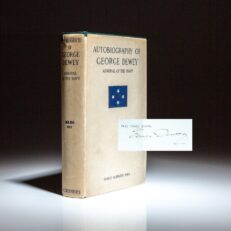 You're viewing: Autobiography Of George Dewey $1,500.00
Add to cart