The First Battle: A Story of the Campaign of 1896

The First Battle: A Story of the Campaign of 1896 by William J. Bryan, presented by the author to the President of Mexico, Porfirio Diaz.

Thick octavo, 673pp. Full brown leather, rebacked with raised bands and title in gilt over red leather spine label. Covers are stamped in blind with a ruled border and a floral motif in the center. All edges gilt. Floral endpapers with decorative gilt turn-ins, hinges reinforced. Chipping to corners and bottom edge of boards. Boards have patches of white residue from leather preservative. Toning to pages with a few chips and tears, but given the time period, the paper is in very good condition. All illustrations present. Previous owner’s bookplate on front flyleaf with a gift inscription written in ink opposite the title page. Presentation page has the following inscription signed by the author: “Presented to Pres. Porfirio Diaz / City of Mexico / By W.J. Bryan / With great respect / Jany 21-98.” Additional date added at the bottom of the page in blue ink “April 29, 1953.” A nice example of this late nineteenth-century campaign narrative.

William Jennings Bryan (1860-1925) was a great orator and influential member of the Democratic Party. He served two terms in the House of Representatives for the state of Nebraska from 1891-1895, then ran unsuccessfully as the Democratic nominee for president in the elections of 1896, 1900 and 1908. In December 1897, Bryan and his wife made a three-week tour of Mexico at the invitation of President Porfirio Diaz. At the close of the trip, Bryan was highly complimentary of President Diaz and the hospitality of the people of Mexico. In the month following his return to the United States, Bryan presented President Diaz with this gift of The First Battle: A Story of the Campaign of 1896. 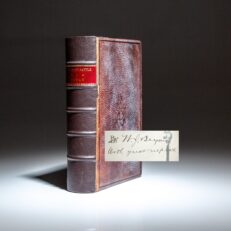