Scarce first edition, first printing of The Flagship by Fitch W. Taylor in a fine binding.

Senior Chaplain of the U.S. Navy Fitch W. Taylor (1803-1865) was first a minister for the Protestant Episcopal Church in the Diocese of Maryland. During his twenty-four years of service in the U.S. Navy, Taylor circumnavigated the globe aboard the USS Columbia, one of the first U.S. naval ships to make such a voyage. The Flagship details his experiences aboard this vessel.

The bookplates in these volumes belonged to Thomas W. Lawson (1857-1925), a controversial Boston businessman who promoted and manipulated stocks, primarily in the copper market. 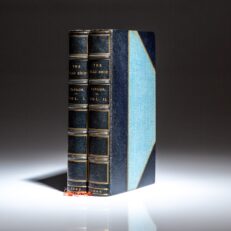