Inscribed to Joan Shalikashvili, the wife of Chairman of the Joint Chiefs of Staff John Shalikashvili, first edition of Back to Work: Why We Need Smart Government for a Strong Economy by Bill Clinton. 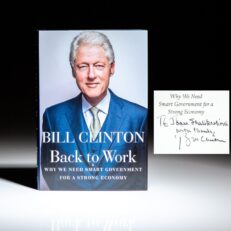