Confessions on an Assigned Theme by Russian President Boris Yeltsin.

Twelvemo, 192pp, [1]. Gray printed wraps, title on cover and spine. Bound at spine. Full text in Russian. Light soiling to cloth from handling, wear to spine. Translation also yields the title as “Confessions on a Given Topic.” Signed by Boris Yeltsin on the title page to “Aleksandr,” dated “06.03.2003.” An exceptionally scarce signed book by the former president.

Comments: Boris Yeltsin (1931-2007) served as the first President of Russia from 1991-1999. He was a former member of the Communist Party of the Soviet Union, who initially supported the reforms (perestroika) of Mikhail Gorbachev. He later thought the reforms were too moderate, resigning from the Politburo in 1987. In 1991 he was elected the president of the Russian Soviet Federative Socialist Republic, which was quickly dissolved, becoming the Russian Federation. His chosen successor was Prime Minister Vladimir Putin. 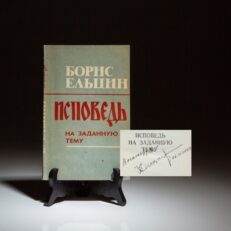