First edition of Crusade in Europe by Dwight D. Eisenhower, inscribed to his friend and WWI comrade, G. Gray Garland.

Signed on the half-title: “For Gray Garland – with best wishes and warm regard from a comrade and friend of The First World War. Dwight D. Eisenhower. January 1, 1949.”

During World War I, Major Dwight D. Eisenhower served alongside the recipient of this book, Captain G. Gray Garland, becoming lifelong friends. The two officers were stationed together at Camp Colt in Gettysburg, PA, which was Eisenhower’s first command, training tank crews for combat in France. This signed copy of Crusade in Europe was set aside to be inscribed by General Eisenhower, with records from the Eisenhower Library showing that it was the 124th copy personally signed by the author. “There are mighty few men as busy as Ike who would take the time to remember and write an old friend. I have never known a finer character. I hope to see him in the White House.” G. Gray Garland, 1948. 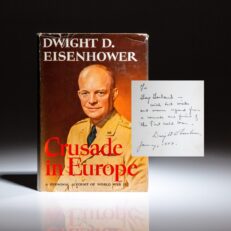