Letter from Secretary of State Colin Powell to New York Times columnist Bill Safire, with a signed “Doo-Rag,” in response to a New York Times Magazine column by Safire.

Housed in custom blue cloth clamshell, title on cover affixed to label. Includes shipping envelope. In a column titled “On Language – The Way We Live Now – Don’t Do Do-Rag,” dated March 6, 2005, Safire discusses the proper use of the word “do.” He argues that using the phrase “we don’t do” is not proper English, but has been embraced by society as an authoritative statement. Safire finishes the column with a commentary about “doo-rags,” offering to wear one to the office for a week if he’s wrong about the origin of “do-rags.” In a letter dated March 24, 2005, Secretary Powell offers Bill “your very own ‘DOO-RAG,’ as promised. Colin.” 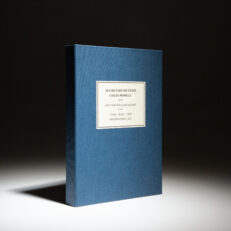