Germany Is Our Problem

First edition, first printing of Germany Is Our Problem by Secretary of the Treasury, Henry Morgenthau, Jr.

Octavo, 239pp. Blue cloth, title printed in gold on spine. Stated “first edition” on copyright page, with “I-U” publisher’s date code beneath. Includes the color bifold map, which details the postwar German partition plans. This copy also contains the memorandum from Secretary Morgenthau to President Roosevelt, reproduced in the first chapter. Letter from the “Society For The Prevention of World War III” included with this book, introducing the text to the subscriber. Dampstain to rear cloth panel, not impacting the text or endpapers. In the publisher’s first state dust jacket, $2.00 on front flap, dampstain to rear panel, chipping along top edge, with a closed tear to the front hinge. Archival repair to verso to reinforce top edge. A very good example of this important historical work.

This work by Henry Morgenthau, Jr. (1891-1967), while serving as the Secretary of the Treasury for President Franklin D. Roosevelt, details his plan for the occupation of Germany after World War II. His proposal sought to eliminate the war making potential of Germany for all time, through territorial dismemberment and deindustrialization. The Morgenthau Plan guided the early German occupation, but was scrapped in favor of the Marshall Plan. Historians believe that full scale deindustrialization of Germany would have resulted in the starvation of 25 million German citizens. 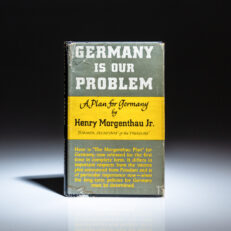