Highways and Byways in Buckinghamshire

Inscribed by British Prime Minister J. Ramsay MacDonald to U.S. Secretary of State Henry L. Stimson, Highways and Byways in Buckinghamshire by Clement Shorter, in honor of their visit to Chequers during negotiations for the 1930 Treaty for the Limitation and Reduction of Naval Armament.

The London Naval Treaty, known officially as the Treaty for the Limitation and Reduction of Naval Armament, was aimed at limiting the tonnage of naval vessels and establishing international law regarding submarine warfare. This treaty was signed by the United States, Great Britain, Italy, Japan and France on April 22, 1930, ratified on October 27th of 1930. These idealistic treaties, including the 1922 Washington Naval Treaty, between the world’s largest naval powers, were aimed at eliminating the possibility of future war. 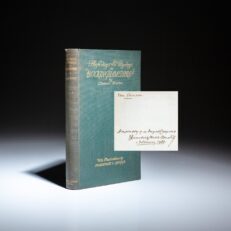 You're viewing: Highways and Byways in Buckinghamshire $750.00
Add to cart