Honorable Men: My Life In The CIA

Signed first edition of Honorable Men: My Life in the CIA by William Colby.

Octavo, 493pp. Blue hardcover, blue cloth spine with title in gilt on spine. First edition, first printing with full number line on copyright page. In publishers near fine dust jacket, retail price on front flap, light wear along top and bottom edge of spine. Inscribed by the author on the half title.

William Colby served as the Director of the Central Intelligence Agency from 1973 to 1976. He was replaced by future President George H.W. Bush in 1976, in a Ford Administration shakeup that became known as the Halloween Massacre. He would write two books in his retirement, Lost Victory and Honorable Men: My Life in the CIA. 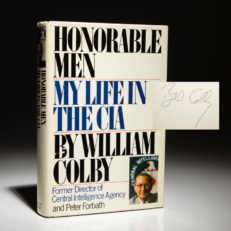