An inscribed copy of In China by Eve Arnold, from the German economist Caio Koch-Weser to former secretary of defense and head of the World Bank, Robert McNamara.

Quarto, 201pp. Black hardcover, title in silver on spine, embossed on front cover. In publishers near fine dust jacket. Inscribed by Caio Koch-Weser to Bob McNamara with a gracious inscription: “To Bob McNamara, Merry Christmas! To remember your “historic mission” to Beijing in 1980, and to prepare for your visit to China in 1982. With admiration and affection. Caio and Martha. December 1981.” Mr. Koch-Weser spent 26 years at the World Bank, serving as the personal assistant to Robert McNamara from 1977-1980, then moving his way up in the organization. He finished his career as the secretary of state in the Federal Ministry of Finance in Germany, retiring in 2005. 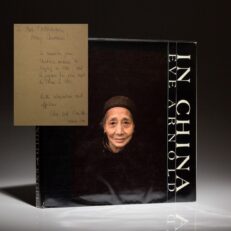