Octavo, xxvi, [6], 782pp, [2pp ads]. Blue cloth, title in gilt, swastika on front cover. Clean text throughout, with no extraneous notes or wear. Top edge dyed green. In publisher’s dust jacket, wear at edges and at hinges, light toning to spine, a very good example. This is the Volksausgabe edition of Mein Kampf, or People’s Edition, first issued in 1930. (Pastore 016) Inscribed by German General Hellmuth Pfeifer: “To Lieutenant Hertel, as a reminder of your time as a platoon leader in the 2nd and 3rd Battalion during the war. On the occasion of the departure of the 3rd Battalion from the 185th Infantry Regiment. Pfeifer – Lieutenant Colonel and Regiment Commander in the field, October 12, 1940.”

German general Hans-Hellmuth Pfeifer (1894-1945) commanded the 65th Infantry Division during World War II, charged with the protection of Italy. He was the recipient of the Knight’s Cross of the Iron Cross, the highest military honor of the Nazi German government, awarded for outstanding military leadership and battlefield bravery. General Pfeifer was killed during the Battle of Bologna, shortly before German forces surrendered on April 22, 1945. 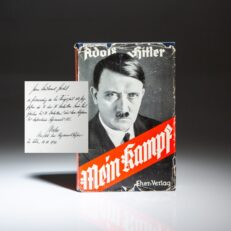