Octavo, [two volumes], xi, 596pp; xi, 594pp. Black cloth, titles in silver on spines, signature of the author in gilt on front covers. Stated “first edition” in both volumes. Top edge dyed green. Some wear to front hinge of Volume I, sound text block in both volumes. In publisher’s first state dust jackets, $5.00 on front flap, toning to spine of both, light chipping along top edge, both in exceptional condition considering how jackets from this edition typically age. (Burns 0016) Inscribed by President Harry S. Truman in Year of Decisions: “To my good friend, Hon. Dick Daley, the great Mayor of the Windy City. 10/6/56. Harry Truman.” An exceptional association copy.

With 1956 being an election year, presidential candidates were vying for high-profile endorsements, such as former President Harry Truman. The recipient of this book, Chicago Mayor Richard J. Daley, was the chairman of Adlai Stevenson’s Illinois delegation. In August of 1956, Truman had endorsed Averell Harriman for the Democratic ticket. The nomination would eventually go to Stevenson, and Truman enthusiastically endorsed him for the presidency. The dedication in this book, to “the great Mayor of the Windy City,” begs the question if there was a double meaning in this inscription between two political allies who found themselves at odds during the fall of 1956. Provenance: From the private collection of Patrick McClain (1926-2020), aide to Mayor Richard M. Daley. 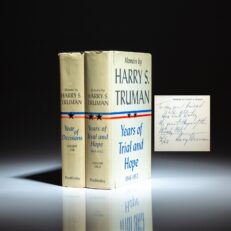