I was closer to John Miles than a brother. I have seen him in places that made hell look like a playground. – Harry Truman, in 1922, explaining his vote for republican John L. Miles. Signed funeral guest book for Major John L. Miles, a fellow officer in the 129th field artillery regiment with President Harry S. Truman during WWI. Octavo, [38pp]. Faux brown leather, title printed on label affixed to front cover. Bound at spine with plastic spiral binding. Notes from previous owner on front free endpaper. Previous ownership blindstamp on last page. Signed by Harry Truman on the guest register.

Major John L. Miles was a lifelong friend of President Harry S. Truman, whom he called “Captain Harry.” They served together in the 129th field artillery regiment during WWI, with Captain Truman as his commanding officer. After the war, Truman crossed party lines to support his candidacy as the County Marshall of Jackson County, Missouri, then later as the Sheriff of Jackson County and Chief of Police for Kansas City. Major Miles died in 1961 with Harry Truman attending the funeral in Independence, Missouri. 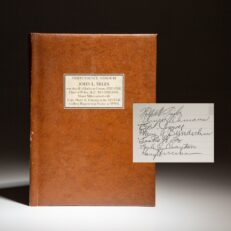