Signed limited edition of the Memoirs of Harry S. Truman, inscribed in both volumes to Rufus B. Burrus, a lifelong friend, family attorney and board member of the Harry S. Truman Library Institute.

This limited edition set is inscribed to Rufus B. Burrus (1900-1990), who was a lifelong friend, neighbor, family legal adviser, and board member of the Harry S. Truman Presidential Library Institute. This limited edition set of the Memoirs of Harry S. Truman is limited to 500 unnumbered copies. They were originally meant to be released to the public as a signed limited edition set for $35.00, but President Truman had no desire to profit off his signature. In a letter to Ken McCormick of Doubleday, dated July 1, 1955, Truman comments that “I cannot possibly enter into a program which would look as if I were selling autographs instead of a book. I want the book sold on its merit.” Doubleday sent President Truman 500 copies of the deluxe set, which he inscribed to dignitaries over the years. Not all of the 500 were distributed by the president, with a few remaining unsigned copies being sold at the Truman Library. 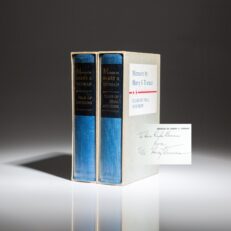