Memories – An Autobiography by Ethel Barrymore

Comments: Frank Sinatra and Ethel Barrymore starred together in Young At Heart in 1955, opposite Doris Day. Mrs. Barrymore passed away in 1959. Frank Sinatra (1915-1998) was an actor, singer, producer and political supporter. He is considered by many to be the “greatest singer of the 20th Century.” In 2018, Sotheby’s auctioned off part of the estate of Frank Sinatra’s wife, Barbara Sinatra. This collection included numerous pieces from their homes in Los Angeles, Malibu and Palm Springs. This book came from the personal collection of the family. 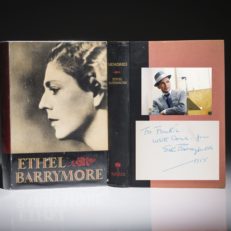 You're viewing: Memories – An Autobiography by Ethel Barrymore $540.00
Add to cart