Eliezer “Elie” Wiesel (1928-2016) was a Romanian-born American author, activist, and Holocaust survivor. Wiesel wrote Night to describe the time he spent as a Jewish prisoner in Auschwitz and Buchenwald, two of the largest Nazi concentration camps of World War II. In the 70 years following World War II, Wiesel defended human rights and played a role in many improvements to Jewish Studies and Holocaust remembrance, particularly in the United States with his work at the Holocaust Memorial Museum. Amongst many other high honors, Wiesel was awarded the Nobel Peace Prize in 1986 and the Presidential Medal of Freedom in 1992. 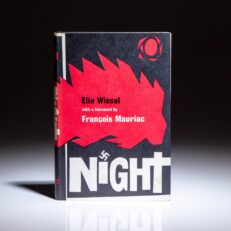