Bernard Baruch (1870-1965) was an American investor, financier, philanthropist and political adviser. He founded the Intercontinental Rubber Company and dominated the rubber market in the early 1900s. He founded his own brokerage and became known as “The Lone Wolf of Wall Street,” when he refused to partner with any brokerage house. He was an adviser to Democratic presidents from Woodrow Wilson to Harry S. Truman and a close friend of Winston Churchill. He died in 1965. 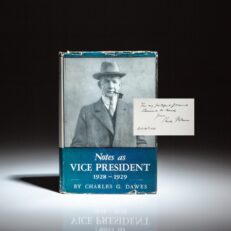