Adlai Stevenson II (1900-1965) was a two-time Democratic presidential nominee (1952 and 1956) and a potential “draft” candidate in 1960. Stevenson refused to campaign for the 1960 Democratic nomination, but he hoped the party would turn to him. In May of 1960, John F. Kennedy approached Stevenson for an endorsement, offering him Secretary of State in exchange, but Stevenson refused. After Kennedy won the presidency, he offered the elder statesman three positions: Attorney General, Ambassador to Great Britain or U.N. Ambassador. Stevenson accepted the U.N. Ambassador position, playing a critical role in the upcoming Cuban Missile Crisis. Four distinct versions of the Kennedy-Johnson Official Inaugural Program were produced in 1961: full leather, hardboard, cloth and paper booklet. The full leather Limited DeLuxe Edition was produced for dignitaries, with only a handful of known copies. 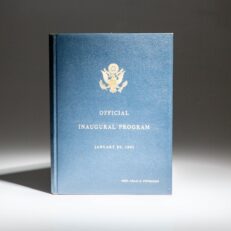