Mounted print, measures 11 x 14 inches. Signed by the artist, Aaron Shikler, below the print. Shikler is known for his paintings of American statesmen, including the posthumous character study of John F. Kennedy, which became his official White House portrait. Signed on the mount by the First Lady: “For Bonnie and John Swearingen – Who add sparkle and zest to my life – Lady Bird Johnson.” A fine example. 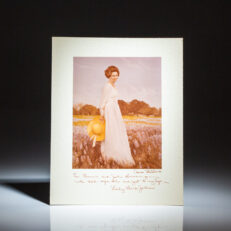 You're viewing: Portrait of Lady Bird Johnson $325.00
Add to cart