Records of the Town of Hyde Park

This copy of Records of the Town of Hyde Park was previously owned by New York Councilman and patrician, Carter Burden. It was then acquired by David Scott Carmichael, a noted Roosevelt collector, whose bookplate appears on the chemise. In 1996 it was sold by Glenn Horowitz Bookseller, along with other notable objects from the Roosevelt Family. This edition was limited to 100 copies, all with handwritten limitations by then Governor Franklin D. Roosevelt and dated “Hyde Park, 1928.” The limitations were all written by Roosevelt on the same day, which he accomplished “in one grumpy sitting.” This book was issued with a pink dust wrapper, also numbered by Roosevelt, but this copy’s jacket has been lost. 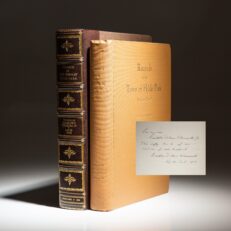