Winfield Scott Hancock (1824-1886) was an army officer, serving with distinction during the Mexican-American War and as a Union general during the Battle of Gettysburg. He was the Democratic nominee for President of the United States in 1880 but lost to Republican James A. Garfield. 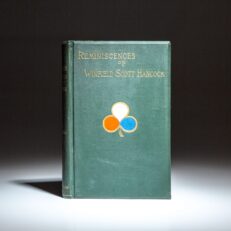 You're viewing: Reminiscences of Winfield Scott Hancock $825.00
Add to cart