Comments: The works of Edward Coke are considered the definitive writings on the Elizabethan and Jacobean eras. He produced thirteen volumes of reports, three of which have been bound together here. These reports were used as precedence for voiding the Stamp Act of 1765 and writs of assistance, which led to the American Revolution. His works would go on to influence the third and fourth amendments of the constitution, which restricts the quartering of soldiers in private homes and guarantees against unreasonable search and seizures. Its no surprise that President Buchanan, a prominent lawyer from Pennsylvania, would have these books in his library. 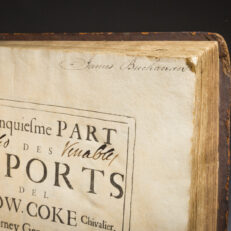