Salmagundi – and a Poem by Ernest M. Hemingway.

Comments: Frank Sinatra (1915-1998) was an actor, singer, producer and political supporter. He is considered by many to be the “greatest singer of the 20th Century.” In 2018, Sotheby’s auctioned off part of the estate of Frank Sinatra’s wife, Barbara Sinatra. This collection included numerous pieces from their homes in Los Angeles, Malibu and Palm Springs. This work includes five poems by William Faulkner and a short poem by Hemingway on the back panel titled “Ultimately.” 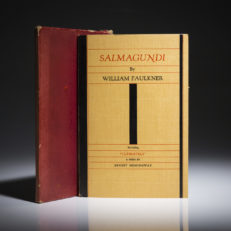