Personalized letter from former President Gerald R. Ford to the televangelist Reverend Robert Schuller. Printed on Gerald R. Ford Presidential stationary. Includes envelope with mailing address. Beginning in 1981, a production of The Glory of Christmas was produced annually by the Crystal Cathedral in Garden Grove, CA. This tradition continued until 2009. This letter from former President Ford is thanking Reverend Schuller and his wife Arvella for the recording of The Glory of Christmas and congratulating him for the success of the TV broadcast. Framed in attractive silver frame with archival glass.

Comments: Reverend Robert Schuller was a Christian televangelist, known primarily as the host of Hour of Power, which was broadcast from 1970-2010. He was the founder of Crystal Cathedral in Garden Grove, California. He passed away in 2015. 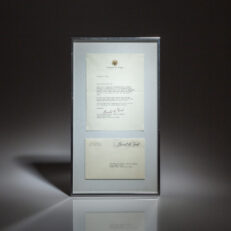