Signed photograph of Colonel Paul W. Tibbets standing in front of his aircraft, the Enola Gay.

Brigadier General Paul Tibbets (1915-2007) was the pilot of the B-29 Superfortress, known as the Enola Gay, which dropped the atomic bomb on the Japanese city of Hiroshima. He was accompanied by Theodore “Dutch” Van Kirk (1921-2014), the navigator of the Enola Gay and last surviving member of the crew. 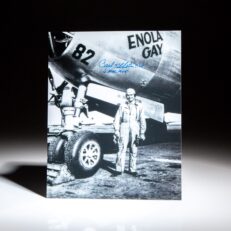