Measures 12.5″ x 15.75″, in black and white. Photograph depicts Admiral Halsey seated and smoking a cigarette. An original of this photograph resides in the Smithsonian National Portrait Gallery. Includes a Western Union telegram announcing the death of Admiral Halsey in 1959, with an invitation to the funeral services at the National Cathedral in Washington, DC. Inscription reads: “To Dr. George T. Pack – With admiration & deep gratitude. W.F. Halsey – Fleet Admiral – U.S.N. (ret.)”

Admiral Halsey met Dr. George Pack after WWII when Halsey developed colon problems. Halsey was advised to have a permanent colostomy, but after consultation with Dr. Pack, he was treated medically. The two remained close, with Halsey confiding his true feelings about prominent world leaders to Dr. Pack. (Goldsmith, A Conspiracy of Silence, p.7) Fleet Admiral William F. Halsey (1882-1959) was an American Navy admiral during World War II, becoming commander of the South Pacific Area. He oversaw allied forces during the Battle for Guadalcanal and the Solomon Islands. After promotion to the command of the Third Fleet, he took part in the Battle for Leyte Gulf, which was the largest naval battle of the Second World War and, by some accounts, the largest naval battle in history. He retired in 1947 and was buried at Arlington National Cemetery in 1959. 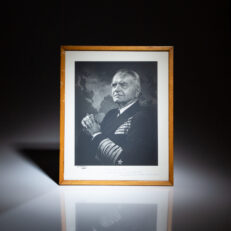